Churches are starting to live stream, record, and broadcast their services more and more. PTZ cameras are often the go-to choice for video, and together with our PTZ camera control software, USB to VISCA control, video, and power over Ethernet balun sets, and a production system such as vMix, TriCaster, or Wirecast, churches can easily produce professional quality videos and share them on their website, Youtube, Vimeo, Facebook, and other social media channels. No matter what type of PTZ camera is in your budget, we have you covered - our software and hardware solution are compatible with virtually all PTZ cameras and Windows based production systems on the market today.

In Greely, Colorado, Our Savior's Lutheran Church is recording and broadcasting their service using a convenient setup making it easy for volunteers to alternate producing the show. Here's Jason Gentry describing their setup:

"We have three Vaddio RoboSHOT 30x cameras all setup in "home run" configuration.  Two are setup on either side of the church, closer to the altar, so as to be able to focus on anything going on in the front of the sanctuary.  There is one setup very high up at the back of the church so that it can also focus in on the balcony during organ and choir performances.  I tried to use the picture icons for the PTZJoy tiles but most of our shots are pretty wide and, thus, you couldn't really see what was going on in the small tile.  I ended up replacing those with custom buttons that say what the preset is (Sermon, Choir, etc.).  We record the service using a program called vMix.  Using vMix along with PTZJoy, we position the preview camera (i.e. the one that is not being recorded) to the desired view and then make it the "live" camera.  The PTZJoy presets make this whole process incredibly easy as each Sunday's service typically follows a very predictable sequence.  The virtual joystick allows for us to make small tweaks to the camera view to make the shot look nicer.  After the service is over, I post-produce it to add title screens, cut out parts that are slow, etc.  I post the finished video to Vimeo and then link it to Facebook.  We also broadcast on cable tv a week later. " 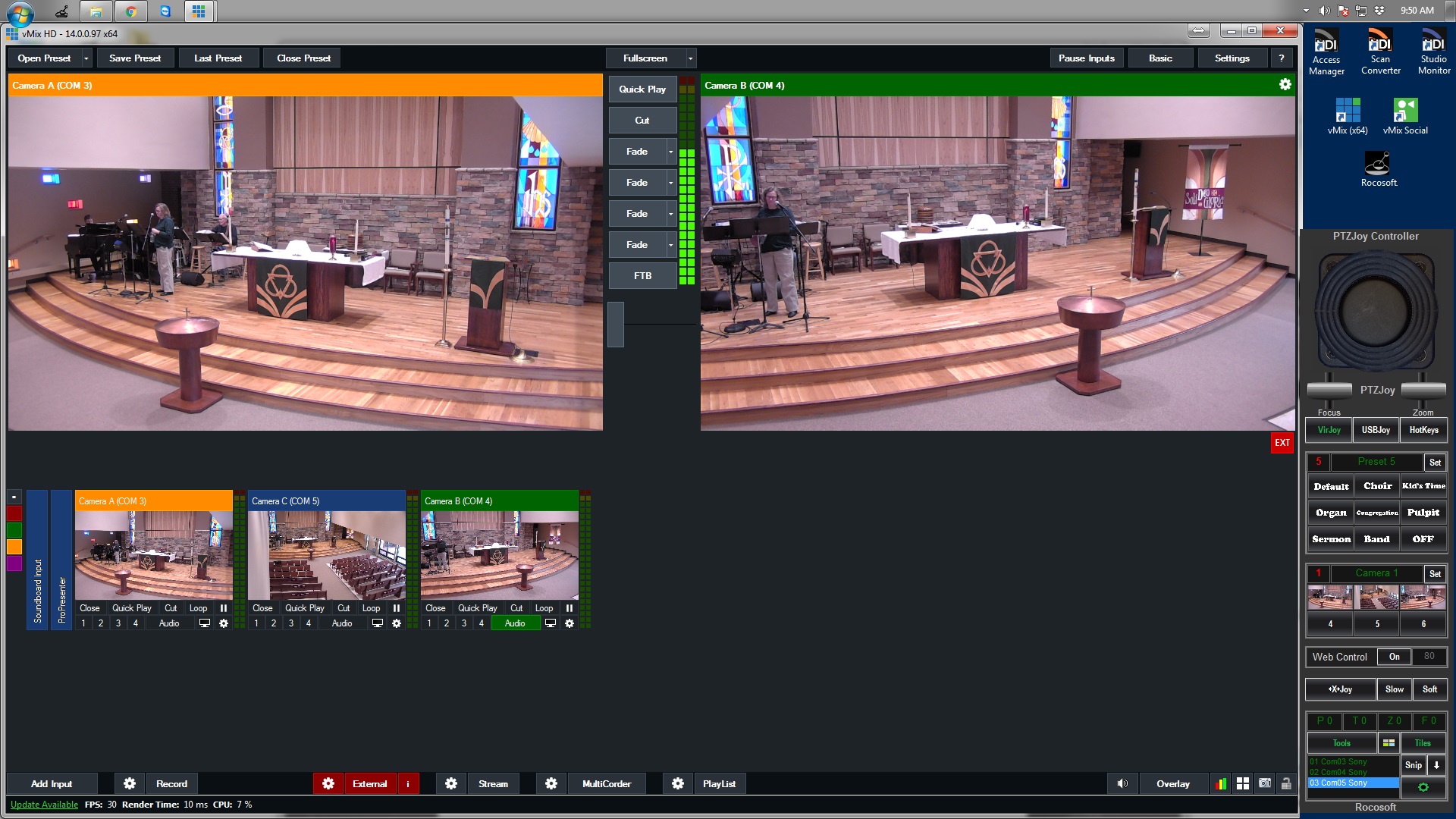 Each remote Vaddio RoboSHOT camera is connected using our Vaddio USB-to-VISCA RS-232 RJ-45 Control Balun Extenders in a “home run” connection to their vMix computer with PTZJoy Controller in their control booth.

The Rocosoft USB to VISCA balun cable sets create virtual COM ports on the PC, enabling camera control and preset management with the PTZJoy Controller app from the vMix Computer.  PTZJoy Controller manages the camera’s movement and presets, while vMix records the service for editing and broadcasting later. 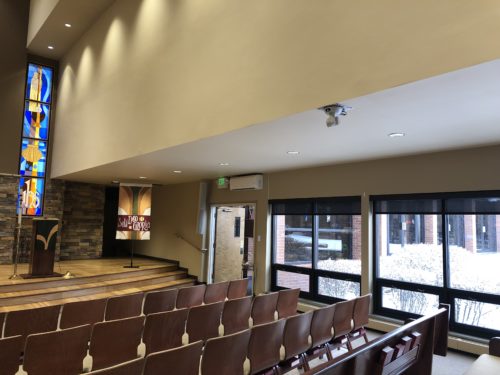 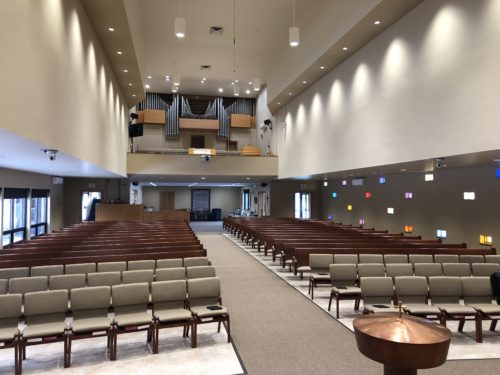 "The plug-and-play nature of PTZJoy was really nice as there was minimal setup required.  After connecting the cameras to the camera control sets they showed up immediately in the PTZJoy menu.  I have two volunteers along with myself that take turns recording services.  That means that these guys usually only operate the system once a month so it is essential that the user interface be easy to use.  As we "live cut" the service that we are recording, we need to be able to position the cameras quickly and predictably.  The control of the cameras through the PTZJoy presets makes this activity incredibly easy.  Each Sunday it really is a one-man show, the person recording has to position the cameras and choose the shots all by themselves.  The easy-to-use PTZJoy software makes it effortless for even the novice user to control all the camera positions."

Ready to get your live setup up and running?

Browse the Rocosoft Store or Contact Us today for help with your project. 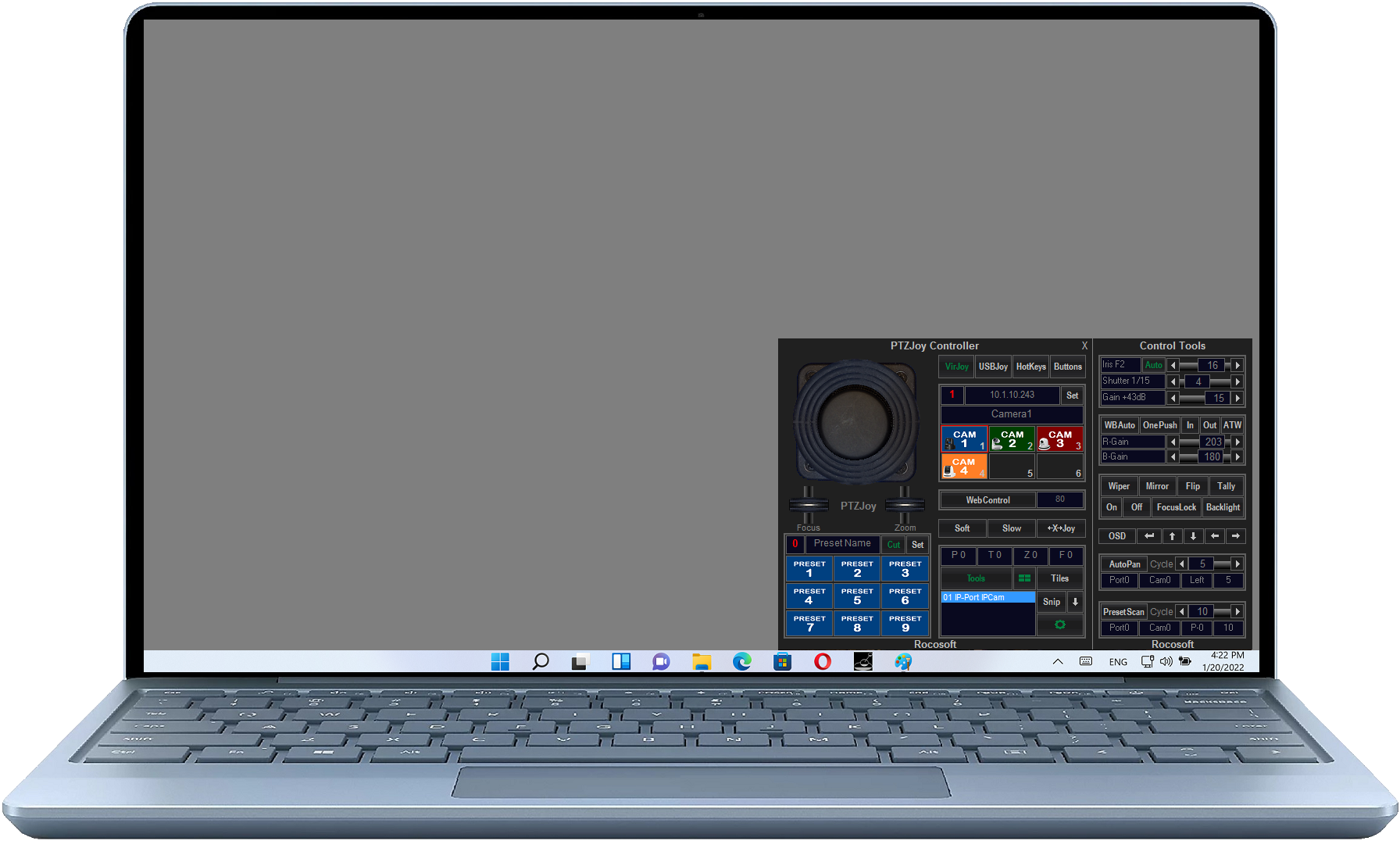 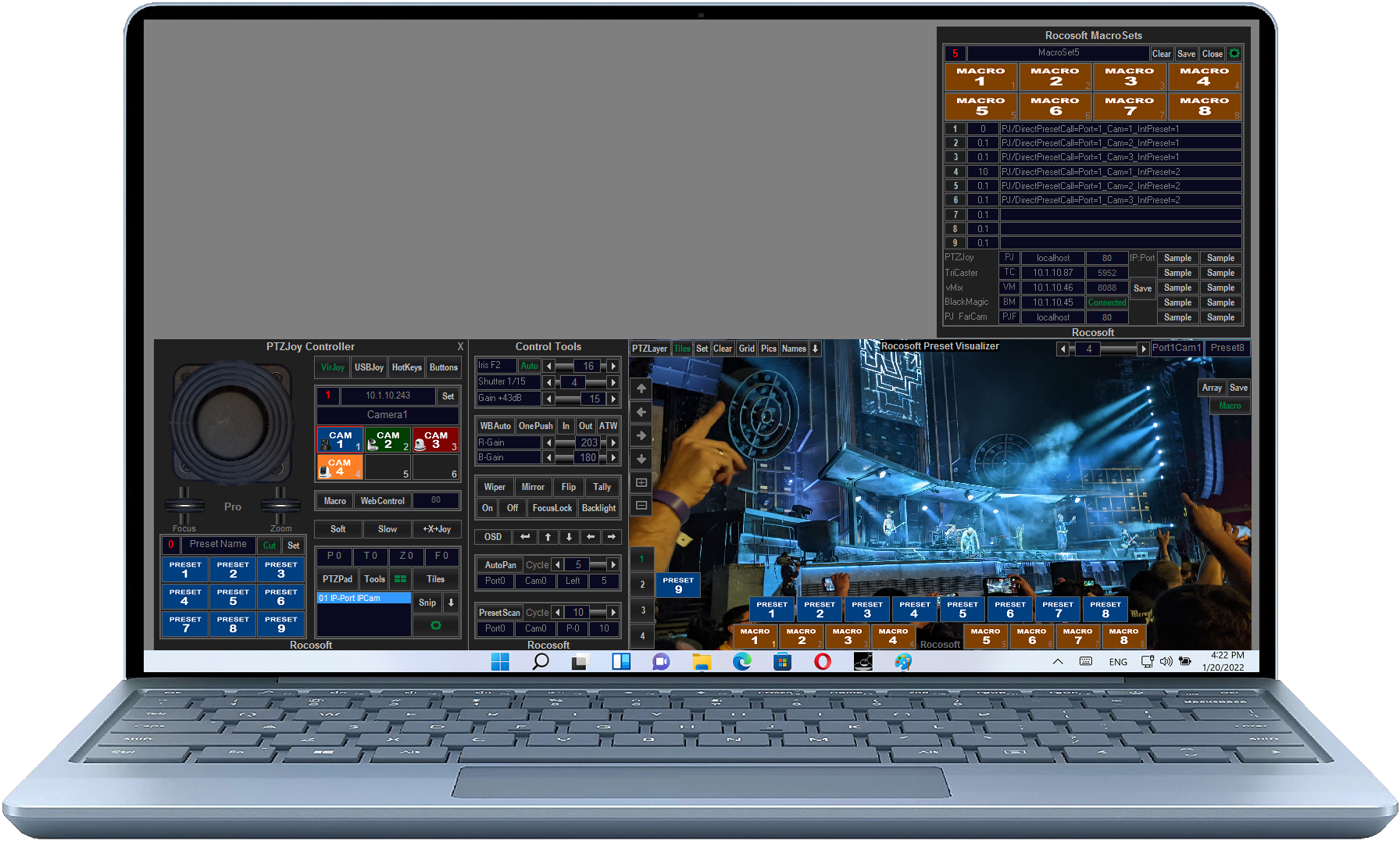 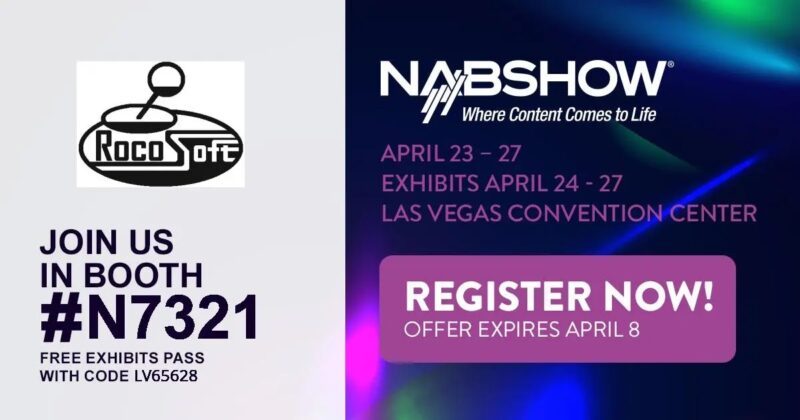